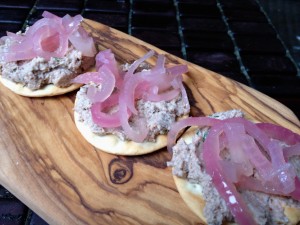 On New Year’s Day, you’ll find people throughout the South eating black-eyed peas for good luck and prosperity in the coming year. While the origins of this tradition may be traced to ancient Egypt, most Southerners will tell you that it dates back to the Civil War. Black-eyed peas were the only food the southern slaves had to celebrate with on January 1, 1863, the day the Emancipation Proclamation went into effect. From then on, peas were always eaten on the first day of January.

In researching this, I found a variety of explanations for the continued consumption of black-eyed peas on the first day of the new year, and none of them are because they taste good or because they’re high in fiber, iron and potassium. Some believe that eating these lowly legumes demonstrates humility and humbleness. “Eat poor on New Year’s, and eat fat the rest of the year.” (Obviously not written by a vegan.) Another explanation is that because dried beans greatly expand in volume, they symbolize expanding wealth. Adding a shiny penny or dime to the pot just before serving is another tradition practiced by some. The person who ends up with the penny or dime in their bowl receives the best luck for the New Year. (Unless the recipient swallows the coin and then all bets are off.)

Some say you should eat exactly 365 black-eyed peas on New Year’s Day. That’s a lot of peas. I’d suggest a new tradition: pureeing them into a pâté. (No coins.) And don’t skip the pickled onions- they are key to what makes this appetizer so good. This recipe is adapted from one I found on the Whole Foods website. May you “eat fat” and prosper in the coming year.