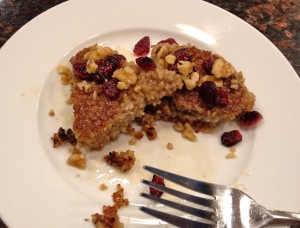 If you’re bored with your breakfast, this is a great way to change up that plain old bowl of oatmeal. And it’s so easy. All you have to do is cook a batch of oatmeal, pour it into a baking dish to cool, cut it, sear it, and top it with fruit, nuts and syrup. It turns out kind of like an oatmeal cookie that looks a bit like french toast. Yum. This recipe uses steel-cut oatmeal, which takes longer to cook than instant oatmeal because steel-cut oats go through less processing. (Steel-cut is the whole grain groat cut into pieces.)

I cooked the oatmeal Sunday night, put the baking dish in the fridge, and every morning this week I’ve cut a few pieces and pan-seared them for breakfast. There are many different recipes available, although most of them call for pan-searing the oatmeal in butter. As an alternative, Pam cooking spray works really well. This particular recipe is on the Get Off Your Tush and Cook website. I added the apple cider syrup to the recipe, but it’s wonderful served with maple syrup as well.