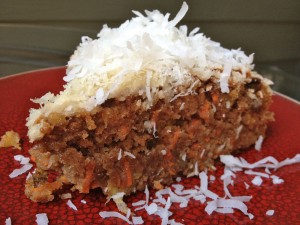 Last week I was invited to a friend’s birthday party and her husband asked if I would bake the birthday cake. The Birthday Cake. That’s a lot of pressure. He said her favorite cake in the world is a vegan carrot cake from a bakery in Spokane, WA. And of course they won’t give out their recipe. I looked at many different carrot cake recipes, both vegan and non-vegan, combined several recipes and made a practice cake. Matt tried it and had a few comments/ suggestions. He said the cake was gritty and the carrot shreds were more like carrot sticks. Gritty? That’s never good unless you’re referring to sand paper. I tried again, and instead of using two cups of whole wheat flour, I used one cup of whole wheat and one cup of white all-purpose flour, and I chopped up the already shredded carrots I bought at the store. Thankfully this version is a keeper, because I’ve gained two pounds from all the carrot cake I’ve been testing. We took the new and improved non-gritty cake to the party last night, and everyone seemed to enjoy it. It may not be as good as the cake from the bakery in Spokane, but it’s still pretty delicious. Happy Birthday Brie!