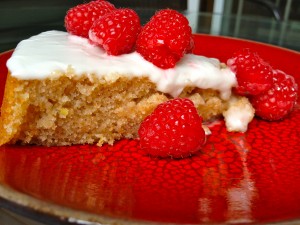 I receive lots of email newsletters from various baking product companies. The latest one featured a two-foot tall lemon chiffon cake that had won a blue ribbon at a county fair. It was gorgeous. I really wanted to make that particular cake, but the recipe included 8 eggs. Definitely not vegan. I tried to move on but I couldn’t get the thought of lemon cake out of my mind. After a few days of recipe searching (and ruling out all the ones that included margarine) I found this vegan recipe on the shop.cook.make blog, and I tweaked it just a bit. The recipe is deceiving because the ingredients are so simple that it doesn’t look like it would taste as amazing as it does! It turns out very moist and flavorful, and it’s so easy to make. (And your house will smell all lemony.)

This would be a wonderful dessert to serve for a dinner party, but it’s also pretty spectacular for two people sitting around the house on a rainy Sunday afternoon. Matt gave this lemon cake his highest compliment: he said he would pay money for it. (Note to self: must look into getting one of those restaurant guest check pads and a receipt printer.) I baked the cake in a 9-inch springform pan, but I think a cake pan would work just as well. You could also go all out and double the recipe to make it a two layer cake. It still won’t be two-feet tall, but especially in this case, size doesn’t matter.