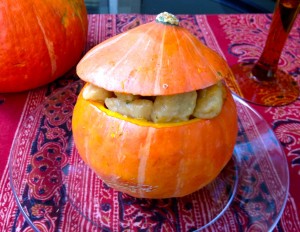 With painful memories of the Great Pumpkin Shortage of 2011 lingering in the back of my mind, I have slowly been socking away cans of pumpkin puree. Hoarding, really. My pantry is getting a bit crowded, so this is Pumpkin Week at the Smith home.  I’m working on a couple of new pumpkin recipes, and I will be posting my favorite recipe for vegan pumpkin bread as well.

Gnocchi (pronounced nyo-kee) are soft dumplings, usually potato-based, but like many Italian dishes, there is considerable variation in the recipes. I’ve never attempted to make gnocchi before, and this wasn’t as difficult as I thought it would be. Since it  calls for only  3/4 cup of pumpkin puree, (save the rest!) the pumpkin taste is very mild. If you by chance have a daughter who doesn’t like pumpkin (!), she probably won’t even know it’s in there. Gnocchi can be served as a side dish or an entree.

A couple of notes:  Since this recipe is rather time-consuming, I was curious to know if you could make the dough one day, and then form and cook the gnocchi the following day. The answer to that is yes. (I took the dough out of the fridge about a 1/2 hour before I rolled it.) I was also curious to know if the cooked gnocchi would taste good the next day, microwaved. The answer is also yes.

I wanted to serve the gnocchi in individual small pumpkins, surrounded by a lovely spinach salad, but my local grocery store only had really big pumpkins available. (If you have 11 children like my friend, Bonnie, a giant pumpkin would be perfect as a serving bowl. Triple the recipe.) So I looked through the squash selection and chose a couple of pumpkin-looking squash. The  photo I posted with the gnocchi in it is a golden nugget squash, and this one was about 4 inches tall. I microwaved it for one minute, cut the top off, scraped out the seeds and then microwaved it for another minute. (Not the lid.) Then it was soft enough inside to scrape out the rest of the interior squash, but it was still firm enough to stand up.

I also bought an amber cup squash, which looks like a pumpkin, and at 5 inches tall it was much bigger than my golden nugget squash. Depending on the size of your squash, you may have to microwave it a bit longer to be able to scrape the flesh out. (For this year’s Thanksgiving dinner, I’m going to try and incorporate a variety of pumpkins and squash as my serving bowls.) 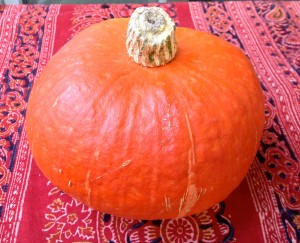