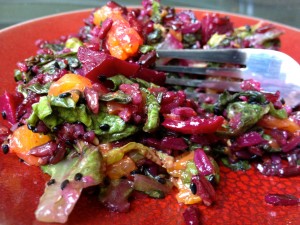 I came across this recipe in my Appetite For Reduction vegan cookbook, and immediately thought of my mother, who is obsessed with roasted beets. The original recipe is titled Wild Rice Salad with Oranges and Roasted Beets, but with the price of wild rice hovering around $10.99 a pound, I decided to substitute black rice, which has been generating a lot of buzz lately.  According to ancient Chinese legend, black rice was so rare, tasty, and nutritious that only the emperors were allowed to eat it. Like brown rice, black rice is full of antioxidant-rich bran, which is found in the outer layer that gets removed during the milling process to make white rice. But only black-rice bran contains the antioxidants known as anthocyanins, purple and reddish pigments — also found in blueberries, grapes, and acai — that have been linked to a decreased risk of heart disease and cancer, improvements in memory, and other health benefits. According to a study by the American Chemical Society (ACS), “one spoonful of black rice bran contains more anthocyanin antioxidants than a spoonful of blueberries and better yet, black rice offers more fiber and vitamin E antioxidants, but less sugar.” And I bought a pound of it at my local grocery store for $2.99. The roasted beets bring out the purple color of the black rice to make a beautiful summer salad. This one’s for you, Mom.