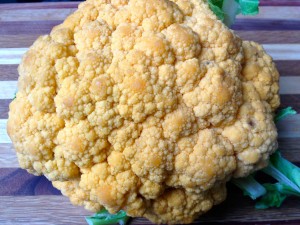 Just what the doctor ordered. Two doctors actually. This vegan soup comes from Dr. Andrew Weil, and it was featured on the Dr. Oz show. Two famous doctors who promote the anti-inflammatory diet, which is heavy on fruits, vegetables, whole grains, healthy oils and spices. Here is a link if you’d like to watch Dr. Weil make the soup: Curried Cauliflower Soup.

I couldn’t wait to try this recipe because I love the blended flavors of cauliflower, coconut milk and curry. I’m posting Dr. Weil’s exact recipe, but I made a few changes (see notes at the end of the recipe).

The other reason I was excited about this soup is because I’m trying to find more ways to include turmeric in my diet. Turmeric, a common food flavoring and coloring in Asian cooking (especially Indian curries), is a super spice. Some researchers believe that curcumin, an antioxidant that’s an active ingredient in turmeric, may prevent and slow the growth of many types of cancer, particularly tumors of the esophagus, mouth, intestines, stomach, breast, and skin.  A number of animal and lab studies have shown promising results. Curcumin can kill cancer cells in laboratory dishes and reduces growth of surviving cells. It’s also been found to reduce development of several forms of cancer in laboratory animals and to shrink animal tumors.

But that’s not all. Turmeric is promoted as an anti-inflammatory herbal remedy and is said to produce fewer side effects than commonly used pain relievers. Some practitioners prescribe turmeric to relieve inflammation caused by arthritis, muscle sprains, swelling, and pain caused by injuries or surgical incisions. Supporters also claim that turmeric protects against liver diseases, stimulates the gallbladder and circulatory systems, reduces cholesterol levels, dissolves blood clots, helps stop external and internal bleeding, and relieves painful menstruation and angina. It’s used as a remedy for digestive problems such as irritable bowel syndrome, colitis, and Crohn’s disease. Wow! That’s a pretty long resume for one spice.

It also adds a bright yellow color to the soup, which on a gray Seattle day nourishes the soul as well as the body.

4.0 from 1 reviews
Print
Curried Cauliflower Soup
Ingredients
Instructions
Notes
I soaked the cashews in water overnight, then drained them and added fresh water to the food processor. This makes a creamy cashew milk that doesn’t have to be poured through a strainer. Just make sure you blend it for at least 5 minutes. I roasted my cauliflower in the oven until tender, instead of simmering it. Then when I put it in the soup pot, I added a cup or so of water. I sautéed 5 cloves of garlic with the onion, because, well, I add garlic to everything. I skipped the added tsp of sugar. My immersion blender was having a hard time blending the chunks of cauliflower, so I let the soup cool and then put it in my food processor. After blending the soup, I threw in a can of garbanzo beans for added fiber and protein.
Wordpress Recipe Plugin by EasyRecipe
3.1.09
feature
Tweet