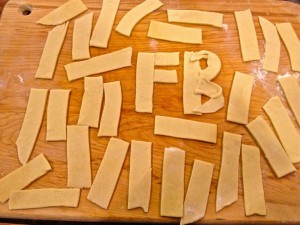 I’ve been making a lot of fresh pasta the past couple of weeks, and our son, my official pasta taster, is loving it. Heavenly, thick-cut ribbons of pasta, dripping in olive oil. So much better than dried pasta. Fresh pasta is one of those things that seems difficult to make, but it’s not. It does take a little practice to figure out how thick to roll the dough and how long to cook the noodles. I searched for a recipe for pasta that didn’t involve eggs and found one on Vegan Dad. I’m reprinting his recipe, although he used a pasta machine and I rolled the dough with a rolling pin and cut the noodles with a knife. (If you’re making this with children, a pizza cutter works great.)

After cooking the first batch, I thought the noodles were a little too thick (they measured 1/4 inch thick), so I rolled the second batch thinner (less than 1/8 inch thick) and that was just right. (They will puff up when you cook them.) When cutting out your noodle shapes, you don’t have to worry about cutting them all uniformly – part of  the charm is the homemade look to them. Just make sure the thickness is the same. I rolled the dough  in one direction, then turned the cutting board and rolled in the other direction. Get a big bag of semolina flour (in most bulk food sections) and play around with it- it may take a few times to get it right, but you’ll enjoy the process. And you and all your pasta-tasters will love the results.