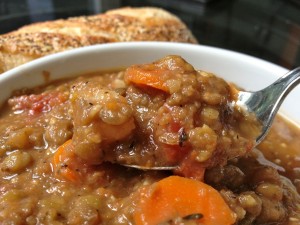 Yesterday when I cleaned out and organized my pantry, I found lots of surprises: my St. Patrick’s Day napkins that I thought I’d lost, a bottle of truffle oil that I didn’t know I had (score!), baking soda that expired in 2009, something that at one time had been a hamburger bun, and three bags of lentils, all of which were opened. While to some people this may suggest complete disarray and a lack of organization, to me this suggested only one thing:  it’s time to make lentil soup!

This soup is thick, like a stew, and it’s also very budget-friendly. A whole pound of lentils costs about a buck. I bought the canned tomatoes on sale for $1.00, the onion cost 32 cents, two bulk carrots cost 25 cents, and the celery cost 1.32 for the whole bunch. (I only used three stalks). The potato, olive oil, thyme, garlic and broth I already had on hand, but you see where I’m going with this. For around five dollars, you can make a rich, hearty, healthy soup that will fill up your family. I still have lots of lentils left, but now they’re occupying a place of honor at the front of the pantry. Over the next week I’ll be making lentil loaf and trying some other lentil soup recipes that I’ve had my eye on.