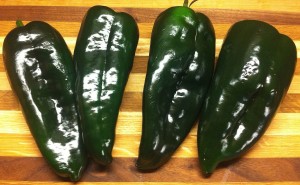 Matt and I first had poblano peppers on a trip to Mesa Verde National Park.  At dinner in the Far View Lodge restaurant we ordered their Poblano Rellenos. Wow, were they good! Deep-fried and oozing with melted cheeses and a cilantro lime cream sauce. Now that we’ve changed our eating habits, I’ve come up with a non-dairy, non-fried version. The first time I made these, the peppers weren’t cooked enough even though the “stuffing” was. Now I pre-cook the peppers for 15 minutes before I stuff them and throw them back in the oven for another 15 minutes once they’re stuffed. Even if you don’t have a tolerance for spicy foods, poblano peppers are fairy mild. Just make sure you remove the seeds before you stuff them.