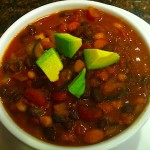 On Super Bowl Sunday I came up with the novel idea of  making chili. I thought it would be fun to make white bean dip and black bean burgers as well, and I named our 2-person Super Bowl party “Bean Fest 2012”.  That was some serious overreaching on my part. When all the chili ingredients were finally simmering in the crockpot, I made the white bean dip and it was b-l-a-n-d.  Back to the drawing board for that recipe.  At this point the festival promoter had had enough of beans and  needed a nap.  That’s what I love about a crockpot-  you can  walk away for an hour or a day. If you don’t have a crockpot, you can make this chili in a big pot and let it simmer for an hour or so. Still really good.

When corn is in season I grill a couple of cobs and throw the kernels in the chili. You can add other veggies or different varieties of beans and more or less “heat.” The veggie sausage makes this a hearty, meaty chili that will satisfy everyone at your table. “Bean Fest 2012” didn’t happen the way I’d planned, but once we settled down with a bowl of chili and a cold beer we quickly got over the disappointment.

5.0 from 1 reviews
Print
Vegan Chili
Ingredients
Toppings
Instructions
Notes
For a bit more chipotle flavor, I also throw in the ¼ cup water that the chili was soaking in.
Wordpress Recipe Plugin by EasyRecipe
3.1.09
feature
Tweet