Pumpkin Week wrapped up this morning with donuts, hot out of the oven. The folks at Mighty-O Donuts in Seattle have perfected the organic, vegan donut. I have not perfected it quite yet, but after a false start, I’m on my way. You will need a non-stick donut pan in order to make these; I bought a Norpro for around $10.

I’d never made donuts before, but I stumbled across a recipe for pumpkin cake donuts on the King Arthur Flour website that looked amazing. Their recipe isn’t vegan- it calls for 3 large eggs. I was hoping that I could follow the recipe exactly as it is, and simply substitute the flax-water vegan egg substitute. I found out it’s not that simple.

My first batch came out bumpy. The batter was very thick and when I spooned it into the pan, it was stiff with ridges. I thought maybe that was normal and the donuts would smooth out as they baked. Didn’t happen. This is what they looked like when I took them out of the pan: 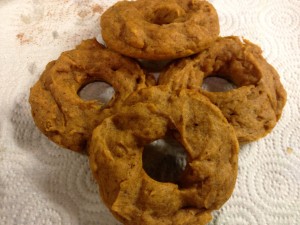 Fortunately I still had half the batter left. I added some almond milk to thin it out, and some baking soda to help the donuts puff up a bit more.  The second batch came out much better. I’m posting the recipe with these changes. (I’d also cut the sugar and salt by a third and increased the spices from the original recipe.) As soon as I took them out of the pan, Matt ate three of them on the spot. He said they tasted “like cake”. Since these donuts are baked, not fried, I say, “Let them eat cake!”