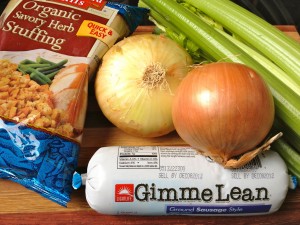 There are so many spectacular stuffing dishes that will grace Thanksgiving tables this year- stuffing featuring delectable ingredients like cranberries, roasted chestnuts, pine nuts, wild rice, apples, mushrooms, etc. This is not one of those recipes. This is Plain Jane Stuffing, starring the workhorses of stuffing:  celery and onions. My husband and son remind me every year that some things cannot be messed with. Thanksgiving stuffing is one of those things.

So, I just messed with it just a tad. I had to. The stuffing I’ve been making for years, Matt’s mom’s recipe, has sausage, cream of mushroom soup and milk in it. Substituting Gimme Lean Veggie Sausage for the Jimmy Dean sausage, and using veggie broth for the moistener worked really well. Two thumbs up from the stuffing judges.