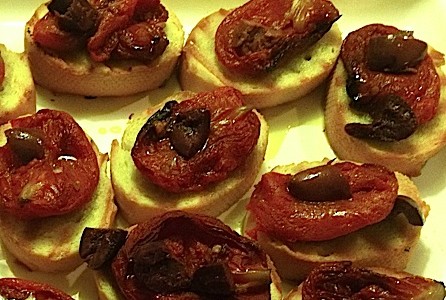 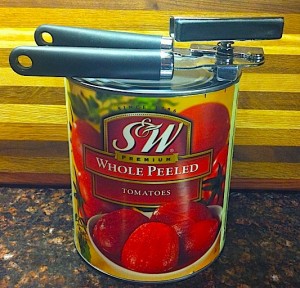 This is our favorite appetizer at  Cafe Lago in Seattle.  Roasted tomatoes served on crostini with a bit of goat cheese.  They call it Pomodori al Forno. I asked our waitress how they get their tomatoes so intensely flavorful, and she said they slow-roast canned tomatoes in their wood-fired oven.  Slow is the key word here.  It take three hours in the oven to dehydrate them.  Worth every penny of electricity.  I like to get the most bang for the buck so I buy the giant 102-oz can of peeled, whole tomatoes at Costco, which costs less than $3.00.  In addition to putting them on grilled bread with a splash of olive oil and some kalamata olives, I throw them on pasta and on top of pizzas.