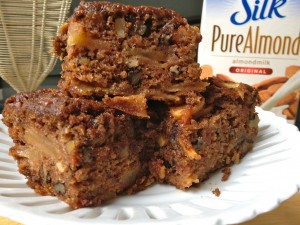 The first time I ever had this apple cake was when our friend Joni brought it over for dinner seven or eight years ago. It was one of the best desserts we’ve ever had, and from then on every time we saw her we secretly hoped she had an apple cake with her. We called it “Joni’s Apple Cake,” but turns out she got the recipe from Pasta & Co.’s cookbook, Encore. They call it “Santori: The Apple Cake Recipe Customers Beg For”. I can see why. After Joni gave me the recipe, I started playing around with it, first trying to make it more healthy and eventually making it vegan. Even though I dropped the three cups of sugar to two cups and swapped the white flour for whole wheat flour, I think it’s every bit as good as the original. And a whole lot better for you.