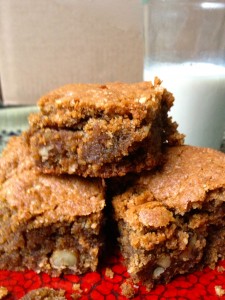 Matt and I stopped by Trader Joe’s to pick up a few things, and we went our separate ways in the store like we usually do. When we met at the cash registers, I had a bag of fingerling potatoes, some limes, a bottle of sesame oil and 4 cans of light coconut milk. Matt had a six-pack of beer and a package of Maple Walnut Blondies. When I asked him if they were vegan, he gave me his sad face and said he hadn’t had a maple walnut blondie since he was a kid, when his now-deceased grandmother used to make them in Stark, KS. He played the dead grandmother card and I folded. I have to confess that when we got home I did try one and they were delicious. Here is my vegan version that Matt says comes really close to the ones his grandmother used to make.